The family of Elliot Rodger called police several weeks ago after being alarmed by YouTube videos that Rodger had been posting "regarding suicide and the killing of people".
The police go to his home but decide not to search his apartment?!
They found him to be "perfectly polite, kind and a wonderful human"?
Are you kidding me?
I guess he had the last laugh when he drafted a 141-page document detailing "how he narrowly missed being found out when the officers knocked on his door" before expressing "relief that his apartment wasn't searched because they would have found his weapons and his writings."
The officers determined he didn't need to be locked up for mental health reasons. But some psychopaths are charming and persuasive. In fact, isn't that a fairly common standard operating procedure for them?
If this man's own family was concerned enough BASED ON VIDEO EVIDENCE that they called the police because he was a danger to himself and society, wouldn't that be cause enough to search his home?
Is there any point in even discussing this issue anymore? This type of mass violence is now commonplace. But there is no common sense in place to prevent it.
To those who regularly stand in the way of drafting laws to help prevent these kinds of sickening attacks, consider this:
"Chris (last victim shot) was a really great kid," Michaels-Martinez's father said at a news conference where he choked back tears and eventually collapsed to his knees in agony. "Ask anyone who knew him. His death has left our family lost and broken."
How many more mothers and fathers need to collapse to their knees in the wake of this kind of horrifying loss before laws start to change?
When those twenty beautiful, innocent school children were slaughtered by a deranged gunman in Newtown, I was heartbroken.
Now I'm just disgusted.
There has to be a way to turn this around...
https://ca.news.yahoo.com/7-dead-7-injured-drive-shooting-student-enclave-111723538.html

Yours truly,
The Happiness Detective

Posted by Happiness Detective at 3:48 PM No comments:

Mother's Day... One Of The Good Ones

My Mom died 14 years ago next month.

I don't feel sadness anymore on Mother's Day. Wistful maybe. I'm incredibly touched by all the photos people share online of their mothers - All so beautiful, young and spry. Or elegant, aged and spirited. Yet all the more beautiful for the markings of time.
I think often what my Mom's life would have been like had she lived. The joy my children would bring her. The crush she would have on my husband. The coffee dates they might have. I imagine he would take her hand and guide her out the door of a coffee shop on Granville Island. "Oh Di," he might say before teasing her that he would beat her in a lasagna making contest. I imagine how much she would adore her son-in-law and how proud she would be to have "one of the good ones" as part of her expanding family tree.
I imagine the quiet moments I might have just looking at her from across the room, if she were still here. I imagine her kindness, her generosity and her unstoppable, infectious (some say hyena-like) laugh.
I imagine how soft her hair might feel if I were to run my fingers through it, should she lay her head on my lap in order that she might "rest" her eyes for just a few minutes the way she did endlessly when I was a kid.
I think how much joy it would bring me to take care of her, to look out for her. To experience the simple pleasure of walking down the street with her in my neighborhood, proudly introducing her to people passing by.
Most of all, I think how much I love her. And how much I would love to thank her for the wonderful job she did being my Mom. Especially now knowing, deep in my often exhausted Ukrainian bones, what the job of being a Mother entails.
I sometimes think it's a rip off that she didn't get to see all this; the way we turned out, the fruits of her labor. But mostly, I let my mind wander all over the maps of my imagination - an imagination she encouraged and cultivated when I was little. I think of the love she had for me that is real and true and I think of the love, respect and admiration I continue to have for her. And when my mind wanders back to this moment where I am, I feel great comfort.
Because when it comes to Moms, I had one of the good ones.
I love you Mom. You are like no other. 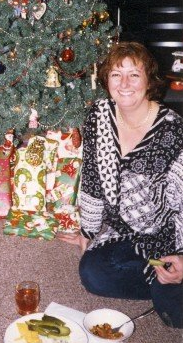