Back in the saddle again...

On Thursday morning, the day of the preliminary job interview for the full time receptionist position (see post below), I was feeling very much like I needed some divine intervention;  a sign that I had guidance and support from something bigger than myself and that I wasn't alone.  More importantly, I hoped the path ahead would be one of ease and grace and that we weren't about to fall head-long into a sand storm of debt and poverty.  In return, I would do all I could (despite how stressed I've been lately) to assist in the unfolding of something that resembled a financially even-keeled life on the path now and ahead.  This was the bargain I struck with Spirit, the Universe, baby Jesus and anyone out there who might be hanging around pulling for me from the other side.

I got out of bed glumly and anxiously, hoping for a speedy demonstration indicating that good things were coming my way.  At 8:35am, my phone rang.

It was an Arbonne client of mine asking me if I could go over the business opportunity with her.  (Arbonne makes fantastic, healthy skin care products and I run a little hobby business with the company where I do home parties to make extra cash.  However, with a small baby and a toddler, the business had taken a back seat for the last six months, as did my mojo, my energy and my sanity as I adjusted to parenting two tots.)  My client was looking to start something to supplement her regular job and wanted to consider Arbonne as an option.   She asked if I would meet with her to see if it would be a good fit.
This was completely out of the blue and before 9am, even.   A sign, perhaps, that the Universe was listening and that a cooperative reciprocity was at hand?  It was beginning to appear that way.

Later than morning, I made a call of my own, to my agent.  I asked her to start submitting me for auditions again.  We had discussed the possibility of doing this a few weeks earlier and clearly, given everything going on in my house, there was no better time than the present to begin.  I felt that I should throw as many balls in the air as possible to try and help us through this financially precarious time (my enduringly low confidence that my acting career would ever amount to anything, notwithstanding).   I hoped that something fabulous would come along which would stave off the necessity of committing to full time work for a full year.  Not that the receptionist job itself is dishonorable or beneath me in any way.  It's just not what I want to be doing at this time in my life.  In romantic terms, it's a job I would have dated back in my twenties or early thirties before realizing that it just wasn't going to work out.   The phrase, "It's not you, it's me" would have been used.  I would have tried to set it up with a friend who had her eye on it and I would have started dating the artsy fartsy job down the street.  That job would have paid me a decent wage and given me time off for auditions.

Ah, auditions...   A vaguely familiar term.   I remember how to spell the word.  I just didn't know if I remembered how to sound it out.

I hadn't been to an audition in over a year.  I hadn't been on set in nearly four years.  I hadn't done a play in six years.  You get the idea...   I'm a little rusty.   And I wasn't sure what to expect when I called my agent.  How would casting directors feel about seeing me again?  How would they feel about my extra baby weight?  How do they get the caramel inside the Caramilk bar?  (The last two questions are more related than I care to admit.)  My agent and I discussed the kinds of roles I would go out for and she told me she would make calls right away and let the casting folks know that I was back and ready to go.

In the meantime, I had a job interview to think about.  Walking to the temp agency, a couple hours later, was an interesting experience in self-reflection.  It occurred to me that I had made that same trip to that same agency nearly two years ago to the day when my husband was last out of work.  And here I was going back (or backwards) again.  I met with a lovely lady there who gave me taxation and other relevant paper work to fill out.  She said that there was already a short list of candidates to be submitted for a second interview at the company that was hiring and asked what else I would be interested in taking if the job didn't go my way.   We discussed other shorter contracts and evening work as possibilities (to my great relief) and then she sent me to a little room to review some dvd's.

And while I was in the little room learning about work place etiquette and the safety hazards of various chemicals, my agent called to let me know I had an audition.   She had sent a quick blast to casting directors and one of them asked to see me.  Just like that.
I felt delight and relief prance around my tense shoulders, mingling like little drops of rain that splatter and pop off the windshield of a car during a sudden rain shower, cleansing the glass so the road ahead might be seen a little more clearly.   Someone up there/out there/in here was listening!

I worked on that audition for most of the next day.  I was nervous as all get out, forgetting my lines and my breathing during rehearsal and hoping against hope that I wouldn't embarrass myself in front of the director and producer when I was in front of the camera.  I also had a very specific intention: To have fun and not to go in there reaking of desperation and thinking about next month's bills.

When I arrived, the session was a bit behind and it gave me a chance to connect with other actors I hadn't seen in a long time.  I chatted with the Mom of a new baby who had just returned to the country.  I traded war stories with another very funny lady with a toddler at home, also in the throws of potty training.   I was surprised to learn how much we all had in common, in particular the longing to find the balance between fulfilling a need to create as artistic professionals and the need to provide for our children financially.  We all shared the unwavering desire that both needs be met through the same means - storytelling.
It was downright invigorating to be in their company.   I also enjoyed chatting with the young pups, the newbies who were auditioning for younger roles while reveling in the excitement that comes at the beginning of a career in the arts.  I loved it!

Then I went into the room, said hello and did my audition.  And for the first time in a very long time, I felt like myself again.

I have no idea what will come of that read but I know that I have reconnected to a part of me that I have been trying to ignore in my pursuit of being a responsible parent.  I am an actor, dammit.  No matter how hard I try,  I just can't not do this.   To neglect this part of me in the name of being all grown up turns me into a dissatisfied, unpleasant, curmudgeonly git.  (Just ask my husband.) Accepting that this is a part of me that will always need tending and then getting my butt out there and doing what I am meant to be doing makes me happy.  It also makes me a better mother and a better person.

So I'm back in the saddle again.

I'm still worried about next month's bills and wondering if and when my husband will get a job.   But for my part, I am determined to believe that I can do this and that I can help take the pressure off him financially at the same time by making a living again as an actor (and a writer and hopefully, one day, a director).

Yours in the quest for bliss, 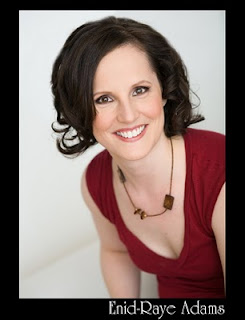 Posted by Happiness Detective at 12:13 AM